Before I get into the story of Coach (its founding, where it is today, and where it’s going), let me tell you what it is: Coach is an online test prep company offering students video lessons, practice questions, access to GMAT experts, and more. 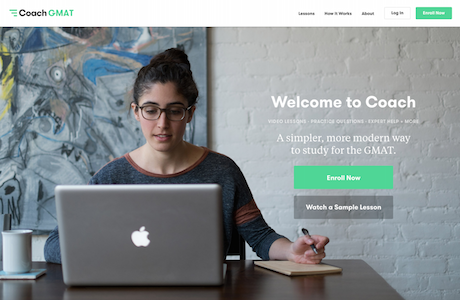 Now that that’s out of the way, let’s talk backstory.

Backstory: How Skillshare influenced me

Online education has been around for a while. Lynda.com, which sold to LinkedIn on April 9th, 2015 for $1.5b, started and popularized the movement. Since then, there have been a lot of companies in online education: Skillshare, Treehouse, Code School, and so on.

While Lynda began offering online classes in 2002, my first taste of online education came from seeing Skillshare grow from it’s founding in 2010 from within the Carbonmade office (shoutout to the Skillshare founder, Mike Karnjanaprakorn).

Then in early 2013, Skillshare moved to online classes and I further saw the value of online education. In fact, Vin Vacanti and I were one of Skillshare’s first test subjects with our “User Acquisition: The 5 Keys to Acquiring New Users for Free” class. Not only did we make significant money through our pre-recorded class, but I could see the value firsthand that an online environment offers through discussions, projects, assignments and so on.

Thanks to Skillshare, building something in online education was planted in my head.

Coming up with the idea for Coach

In early 2014, I was hacking on different online education startup ideas. In my free time and also with the help of Sascha Mombartz, I would ideate, design, and build out my ideas during the weekends and nights.

The furthest along I got with something was building a platform for people to get online coaching for computer games, card games and board games. I went fairly far down this path until coming to a few basic realizations: while the market is big, the price per coaching session wouldn’t be enough after paying out the instructor. Taking a percentage of each transaction wasn’t appealing as it would never add up to a significant amount of money. It was time to go back to the drawing board.

Then in early July, I was hanging out with two of my friends from Yale: Jake Evers and Erfun Guela. The two of them were over my apartment in the East Village watching World Cup games. While Erf and I were friends in college, we hadn’t seen each other in several years and were catching up. He told me that he was a GRE and GMAT tutor in NYC, had written a GRE book with McGraw-Hill and had built himself a rather successful one-man business.

I caught him up about what I had done over the past few years and we hit it off. I don’t remember if it was the first World Cup game we watched together or a day later in the week, but at some point I teased out the idea to Erf about what his thoughts were about building an online test prep company. I grilled him about the market, what was out there, how well the companies are doing and so on. He said he had thought about it and in fact had worked for one called Knewton back in 2009 before becoming a tutor.

Erf was as interested as I was in combining our skills into building an online test prep company. I would provide the startup experience and product knowledge and Erfun would bring his domain expertise and the content. Together we’d divide the responsibilities and get to work.

Getting serious about building Coach

While the initial idea of Coach happened during the World Cup in July, 2014, it wasn’t until September when we started to get really serious about building it. We had conversations once a week during the summer, but September felt right in terms of getting started. I’ve also jumped into a lot of ideas too quickly and I wanted to give Erf and myself enough time to think everything over before we dove head first.

We knew that one of the key differentiators that we could bring to the online test prep market would be the best product that the online test prep world has ever seen. I’d been working out of Eli Rousso’s office a few times a week in Flatiron, New York City, and the two of us had become friends over the summer. I knew that Eli would be the right person to help us build out Coach (codenamed “Project Bulldog” at the time, a nod to Erf and my alma mater).

On a Friday at the end of September, we met with Eli to show him what I’d wireframed out, to share our vision, and to see if Eli was interested in taking the project on. We wanted him to truly be a part of the project, so we suggested that we do an equity deal rather than cash.

The following Monday, Eli gave us his terms and we agreed to them on the same day. Now that we had a designer to work closely with, we could begin figuring out exactly what we were making and in what capacity.

Over the next six months, we worked tirelessly designing, developing (with the help of an old co-worker of mine at Carbonmade, Kyle Fox), writing copy (hat tip, Annie Maguire) and producing video content. I can honestly say that the last six months have been the most fulfilling of my 20-year long Internet career.

Beyond simply outclassing everyone else, we wanted to introduce a new feel, personality and intimateness that online test prep companies grievously lack. We have a hands-on approach where our students can get help from our GMAT experts whenever they need.

Over time, we will introduce far more features that will help set Coach apart from our competition even further. It’s our ultimate goal to completely redefine what it means to study online.

What Coach is today

Today, we’re proud to be launching Coach. Even though building has been a culmination of almost a year’s worth of thinking and six months of execution, we have a lot of work to do. Right now, Coach offers lessons on various parts of the GMAT and we’re tirelessly working on releasing a full GMAT course for students to purchase. Getting that content finished and released to our students, as well as a developing a handful of new features, are our current priorities.

There are dozens of features we looked at building that we either shelved immediately, or over the course of some discussions, because we didn’t feel as if we were ready for them. Our goal is to build the best foundation possible, then grow from there; for launch, we wanted to build just enough so that nothing was missing, but nothing that was unnecessary, or off-brand.

It was very important to all of us that we cut zero corners to release early (as is often done with new startups); and while there is well-known startup philosophy of releasing something you’re not proud of, that wasn’t something we felt like we could do.

Where Coach is going

While I’m confident that our product, design and content are the best in the market, we haven’t completed the entire GMAT course. We’re rolling it out as lessons that you can either buy individually, or in a package. Our number one goal right now is to finish the content so that our students can buy the entire GMAT test and study exclusively with Coach.

While we continue to write, edit, and record our lesson videos and practice questions, we will improve the product and marketing site through feedback.

Alongside producing more videos, we will release some valuable new features for our students as well. Without giving too much away, we have some big ideas about how to continue to disrupt the online test prep space and we’ll be experimenting with them over the next year.