Trials and Tribulations of the New Uncover

OMG is the best way to describe how I feel right now. I’m so relieved to have finally shipped the massive update to Uncover. It’s something that we began working on in July 2013, only to release it ten months later on April 30th, 2014. Anyone who works in product development will know that ten months is an eternity. This release pressed down on us like the heaviest of weights. But all is well now, as it’s everything we wanted it to be and more. That said, we made a lot of mistakes along the way and I wanted to share those with you. 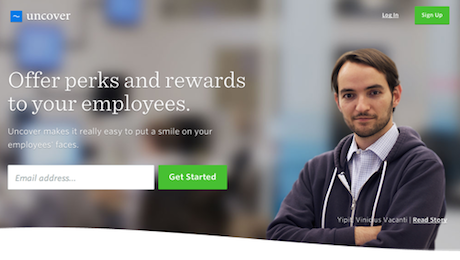 The product offering is itself the same: offer perks and rewards to your employees. But everything other than that is new. We updated the visual design and the branding, added new categories, eliminated required usernames and passwords for employees, made it simpler to renew perks, and made a ton of other behind-the-scenes changes. Read New and Improved to learn more about it or just browse the site.

It was never our intention to get stuck in a ten-month product cycle. It just kind of happened. We started in July 2013 with the intention of getting something testable in the hands of a few customers by September and releasing it to everyone else by Thanksgiving. Unfortunately, it’s just the nature of product development — and especially so when you’re working with part-time people —that deadlines are missed and work takes much longer than you expected.

Still, I blame myself for the scope of the product update. It was too big and too ambitious to finish in three months. If I could go back and do it again, I would have chunked out the massive update we just released into three stages instead of one giant one. The three stages would have been: (1) new visual and branding design, (2) admin tool simplification and removing the need for usernames and passwords for employees, and (3) simplification of the way perks are renewed.

While all three of these feature sets compliment each other, they’re independent enough to have been rolled out one at a time. But I saw it then as one giant improvement rather than three separable smaller ones. If we had only released them in stages, we would have had three separate wins, each motivating our team forward into the next one, rather than one giant release dragging us down. I was partly blinded by what we had learned over the first few months after releasing our first version. That version was a prototype, built over four months, that we deliberately shipped with a lot missing from it. I wanted to fix everything at once.

Never again. As a bootstrapped company, we cannot afford to have so much time between releases. It’s bad for our customers, it’s bad for our morale and it’s not conducive to learning about what’s working and what’s not working in our product. Don’t fall into the trap I did, thinking you need to release something big and shiny all at once.

Why Bootstrapping is Good and Bad

Bootstrapping Uncover has been both good and bad. While we’ve been fortunate enough to have been approached by a handful of investors about raising money, we want to remain bootstrapped until it makes sense for us. There were more than a few times during this long release cycle when I did seriously contemplate taking money, as a lack of resources was a major reason why product development was taking so long. I’m glad I held out, though.

As soon as you make the decision to take money, there’s a time bomb ticking. I’ve always hated the idea of a “run rate” dictating that your business only has twelve to eighteen months to get to X milestone or you have to close up shop. The idea of working on something for twelve to eighteen months only to shut it down sounds like one of the worst things that could ever happen to an entrepreneur. It’s not something that I’d ever want to experience, so when/if we take money for Uncover it will be for growth rather than to see if it’s a viable product.

Where bootstrapping has helped us is that it has given us time to design, build and experiment. Uncover has gone through three iterations in over two years to arrive at what it is today — the first anniversary of our our current product will be on May 8th — and we wouldn’t have been able to get here if it wasn’t for having time. Bootstrapping has afforded us time, and time has given us a successful product with revenue.

I love SaaS. I really really love it. I couldn’t imagine building an online service with any other business model than SaaS — especially as a bootstrapped company. As a SaaS company, we consistently make more money (twelve months in a row and counting) than the month before. As long as you continue to add more customers than you lose every month, you’ll grow.

At Uncover, we’ve only churned one customer in twelve months. In part the reason for that is because we’re a b2b company, and once a business makes the decision to sign up with you, they’ll rarely switch. But it’s also because we’ve built something that people really love. Tell your boss to sign up!

Through the forecasting of revenue that SaaS affords me, I can accurately predict how much money we’ll bring in, which allows me to budget expenses more accurately. With SaaS I know when we’ll have the money to ramp up our product team, keep marketing, and do sales. For example, I was able to budget and pay for a full-time contractor during the final few weeks leading up to our release, brought in to finish up the outstanding to do’s on Uncover, using the information that being a SaaS company gave me.

In addition, you’ll rarely have to shutter as a bootstrapped SaaS company. As long as you’re continuing to make money and add more customers than you churn, you’ll grow. It may take one year. It may take two or three or four, but your revenue will grow and with that your resources. As my friend Eric Friedman says: “Revenue = resources”.